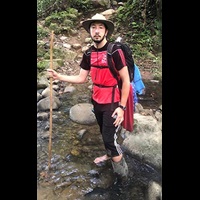 On the morning of our first deployment I woke up as ready as I could have been. Everything had been meticulously packed by nervous hands, and I had quadruple-checked my lists. The rubber boots I dug up from the bunkie were two sizes too big – the only pair large enough for my moronic feet. As I marched up towards the dock in my clanking galoshes, I knew I was in for a rough one, either way. I was surprised, actually shocked, at the amount of bags we were bringing – the boat was so full we almost had no room for ourselves. With all of the fortified rice, reading glasses, soap and food we were preparing to give away, our haul was truly menacing.

While the boat skipped across the water, I tried to appreciate what I was about to do: act as a lead medical practitioner for the first time in my career, in a health system I didn't know, with a population I had never met, in a country whose customs I didn't understand. All during the worst global pandemic since the Spanish flu. Not bad for an improvised elective in my final year at RCSI University of Medicine and Health Sciences.

Our plan was simple: we were going to hit two communities over two days and one night. The first community, La Sabana, was one of the most isolated communities in our rotation, not an island but inland, resting on a plateau high up in the mountains. Dr LaBrot told me that when his team first got there ten years ago, it was the first time many of the elderly (in their 60s and 70s) had seen a doctor. For some, it was their first time seeing a white man in a generation.

Arriving on the mainland, we were met by our driver who was full of banter. His ability to speak expressively while simultaneously dodging potholes at high speeds around narrow corners made me nervous. At the entry point to La Sabana, we unloaded our belongings in front of a long pedestrian bridge crossing the river. This was the first of three bridges, a stretch a little over a kilometre that brought access from the main roads into the village. As we unloaded our gear and waited for the wheelbarrows, I felt an odd itch on my left leg. I looked down to find ants, the hot and hungry jungle variety, crawling all over my left boot. After ripping it off and flailing like an idiot, Chrys and Jack helped us move the bags out of the grass.

"That's weird," Chrys said, "I have never seen the ants act like that, you must have stepped right on top of them… what luck."

That should have been an omen.

The three of us spent a solid 90 minutes shuttling our gear over the three bridges into the heart of the village. My back was sore, and the heat made the metal handles searing hot to touch. I was caked in sweat and exhausted before we had even started. I changed out of my sweaty garments and donned a polo shirt and dressy shorts. It was time for business.

Things started just how I was expecting them to. I was flustered, completely out of my depth, and doing my best to show some mettle. These clinics usually had up to five or six doctors, and a dozen other staff – now we were just one medical student and two managers. The sheer number of people in the 'rancho', my general inexperience and the asphyxiating thought that 'there’s-no-way-you-will-get-to-see-everyone-in-time' were enough to make me tremble.

The very first patient I saw, a diabetic with high blood pressure who needed a renewed prescription and regular follow-up, got nothing from me. Our blood pressure cuff was broken and all three of our glucometers were displaying different error messages. I made the best of it that I could, asked how things had been going, with a clinical exam and brief chat. The real purpose of our visit, which was to see if any of our chronic patients needed readjustment of their drugs, was basically null as a result. I put my nose down and got on with it, although I didn't recognise how truly overwhelmed I was. I felt sorry for the patients, and for the team.

Neither the patients nor my teammates felt sorry at all though. They didn't voice any concerns, didn't ask me how I was doing, or if I needed help. Carrying on as usual, they saw me at work and what they saw was a doctor. They believed in me and that made me believe in myself. That was enough to get me through. 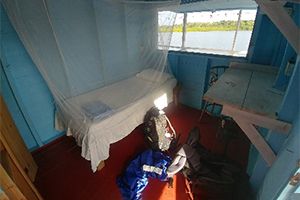 Over the next 10 weeks, I would go on to counsel pregnant teenagers with pelvic inflammatory disease gone completely untreated for months due to no medical presence in their village, treated malnourished children with oral candida who barely have access to emollient creams for their many bizarre rashes, run emergency trauma cases in the jungle, and counselled dozens of diabetics with no access to metformin because of a national shortage of the drug. I grew immensely as both a clinician and as a person.

Not long before I was leading trauma scenarios in the jungle, I was a medical student in Ireland like any other. Not only a medical student, but a clinical year student: I was at the top of the food chain ready to take on the world and put 25 years of academic bookwork to good use. That is, until the world collapsed around us in March 2020, and medical students across the world were locked out of hospitals for more than a year. Like so many of us, in a flash, all my plans evaporated. Medical placements in three continents went up in a puff of smoke, catching me between a pickle and hard place. How I ended up swatting ants off an unconscious Ngäbe child is a different story however.

Humanitarian work had always been my goal, even before I started medicine. Born in Argentina and raised in Canada, my decision to study abroad at RCSI was in part due to an ever-present craving to widen my horizons.

As a young medical student attempting to navigate a career path in humanitarian medicine, RCSI put me in touch with an alumnus named Dr Ben LaBrot, the founder of the humanitarian medical group Floating Doctors. When he was a young physician, he decided to build a floating medical facility on a converted fishing ship to help people in the most vulnerable parts of the world. The boat sailed and served during the Haitian earthquake of 2010, served in Honduras, and then returned to Haiti for the cholera pandemic that followed the earthquake.

In 2011, they were invited to Panama to help address the disparaging health inequity suffered by the Ngäbe-Bugle indigenous populations that live in the Bocas del Toro Archipelago on the east coast. 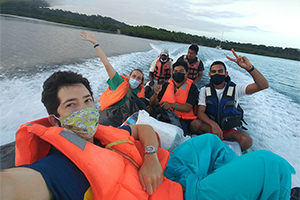 In an attempt to salvage some of my clinical training, most of which had gone online due to COVID-19, I reached out to Dr LaBrot about going to Panama. After some administrative hoop-jumping, it was cleared by the university. My time there has shaped my personal journey in unimaginable ways. I was so inspired that I would go on to write a book, and continue to work with Floating Doctors well into my residency. Dr LaBrot and I will keep in touch for a long time I am sure.

Institutions are made up by people, and the people I met at RCSI make me feel honoured to walk among them. Not a bad place to earn your stripes I'd say. Maybe someday I will be the one to mentor a bug-eyed final med as they live out their dreams. A man can only hope.