Each summer, students spend eight weeks in RCSI’s Research Summer School (RSS) working on a research project under the supervision of an RCSI principal investigator.

David Joyce, an Undergraduate Medicine student speaks about his experience of the RSS. 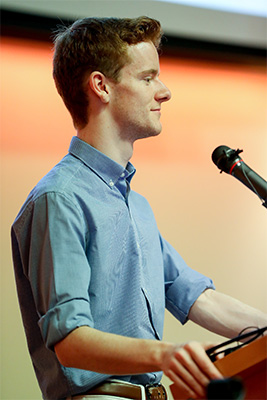 "Last summer I partook in RCSI’s Research Summer School where I worked on a project titled ‘Developing a Novel Antibiotic Loaded Injectable Biomaterial for Wound Healing’.

My eight weeks in the RSS was split between two labs, which meant that I was exposed to two different scientific disciplines.

The next phase of my project was based in RCSI’s Tissue and Engineering Research Group (TERG) Lab with Dr Ciara Murphy. My time in the TERG Lab was focused on synthesising hydrogels with tissue regenerative qualities which could be loaded with my newly synthesised antibiotic.

By the end of my project I had successfully combined two different skills sets to create a finalised product. I was really grateful for the chance to participate in the RSS. It offered me an unparalleled opportunity to undertake funded research during the summer on a project that I found extremely interesting and pertinent to my medical studies.

It allowed me to use theory that I had learnt in medical school in a practical environment, while also gaining new skills that will undoubtedly aid me in my future career."