Women on Walls at RCSI, in partnership with Accenture and Business to Arts, unveils landmark Irish portrait collection 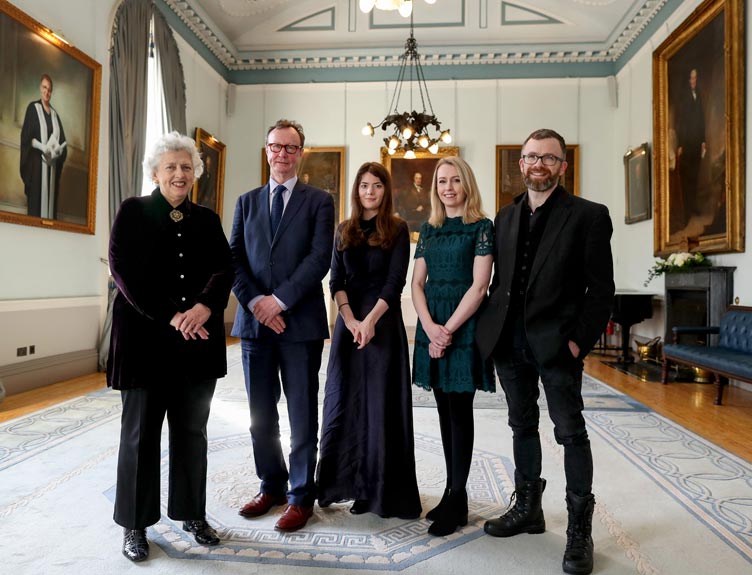 Today, RCSI, Accenture and Business to Arts unveiled a series of new portraits of historical female leaders in healthcare at RCSI. Women on Walls at RCSI in partnership with Accenture recognises the pioneering achievements of a group of eight extraordinary women and aims to enhance the visibility of historical female leaders in healthcare to inspire future generations.

The portraits were officially unveiled today by Minister for Higher Education Mary Mitchell O’Connor TD and RCSI President Mr Kenneth Mealy. They will now hang in the Board Room of RCSI’s historic building on St Stephen’s Green and can be seen at scheduled times throughout 2019.

Speaking at the unveiling of the portraits the Minister for Higher Education, Mary Mitchell O’Connor said: "Women on Walls recognises the pioneering achievements of eight extraordinary women and enhances the visibility of historical female leaders in healthcare. This project reminds us of remarkable women who are largely unknown outside their specialist fields. Eight women who were pioneers in medicine and science. All eight shared a compassion and care for humanity which was as a result of their training as nurses and physicians at the RCSI. Throughout their careers they faced gender-based discrimination, refusals, obstacles and insults, however the persevered and achieved great things. It is a real honour to unveil their paintings here this afternoon."

In March 2018, artists were invited to submit a proposal to Business to Arts, project managers of the initiative. A selection committee identified six artists who were commissioned to paints the portraits. The group of artists have worked with RCSI archivists to research their subjects and complete the portraits.

The following artists have completed their commissions, creating a series of eight individual portraits:

*Biographies of the artists and their subjects can be found below

Speaking ahead of the announcement, Professor Cathal Kelly, RCSI CEO said: “We are immensely proud to unveil these portraits of ground-breaking RCSI women today. These pioneers made significant contributions to education and healthcare here at RCSI, in Ireland and much further afield. We hope that by recognising them through this landmark initiative; we might inspire future generations of women and girls to pursue a career in healthcare and science.

“Each of these women had a profound impact and we want history to remember their legacy. It is our duty to help preserve their story and celebrate their achievements. It is right and proper that today they take their place not just on these storied walls of RCSI but also in the history of healthcare.”

Dr Michelle D. Cullen, Managing Director and Head of Inclusion & Diversity, Accenture in Ireland added: “The contribution of women in society is too often invisible. Who we see on the walls, tells us about what we as a society value, about who is welcome, about who fits in. We set out on the journey of Women on Walls with the ambition of making women leaders visible to inspire future generations. It is truly moving to see these magnificent eight portraits being unveiled by RCSI today, reminding us of the impact these women had in healthcare.”

Andrew Hetherington, Chief Executive, Business to Arts said: “The artists commissioned, have created a powerful series of work highlighting the importance of gender equality. The Women on Walls campaign is a strong example of how art helps to communicate an important message. These eight extraordinary women whose portraits will hang on the walls of RCSI for years to come, represent the exceptional achievements of RCSI graduates and Fellows past, present and future. We salute the achievements of the six artists.”

A new Women on Walls podcast series was announced during the unveiling. The eight-part series celebrates the lives of these eight Irish women who forged careers in healthcare during a time in Ireland when women were expected to stay at home. The first episode features the impact that Dr Barbara Maive Stokes, a paediatrician and pioneering disability campaigner, had on Ireland as a tireless advocate for people with intellectual disabilities. Women on Walls is now available for download from Apple, Google and Spotify podcasts. A new episode will publish fortnightly.

RCSI is committed to promoting gender equality among staff and students for the advancement of the College’s mission to educate, nurture and discover for the benefit of human health. RCSI has been awarded Athena SWAN Bronze accreditation for positive gender practice in higher education.

Women on Walls is a campaign that seeks to make women leaders visible through a series of commissioned portraits that will create a lasting cultural legacy for Ireland. Accenture’s Women on Walls began in 2016 with the Royal Irish Academy which recognised the achievements of leading female academics and to inspire future generations.

You can read more about Women on Walls at RCSI in partnership with Accenture and find out more about scheduled tour times by visiting www.accenture.com/womenonwalls and women.rcsi.com

Benita Stoney (b.1954) is an award-winning portrait artist based in Co. Mayo. Since graduating from Galway Mayo Institute of Technology in 2006, with a BA in Fine Art, she has exhibited widely in both Ireland and the UK. During her studies, portraiture came to dominate her practice. Stoney’s work has been selected for the prestigious BP Portrait Award, National Portrait Gallery, London; for the Davy Portrait Award, Belfast and Dublin; and, most recently, for the Hennessy Portrait Prize Shortlist at the National Gallery of Ireland (2017). She won the Changing Faces Award (2011) at the Royal Society of Portrait Painters and the Jorgensen Fine Art Award (2007) at the Royal Hibernian Academy, where she has exhibited annually since 2004. Selected exhibitions include a solo exhibition Custom House Studios, Westport (2010), ‘Emerging Artists’, The Dock, Carrick on Shannon (2013) ‘Pathways’ at the Leinster Gallery, Dublin (2014), Mystery Portraits Gala, National Portrait Gallery, London (2014, 2017). Besides numerous private commissions, her work is held in the National Self Portrait Collection of Ireland, and in the collections of Mayo County Council, and Royal Holloway College, University of London.

Catherine Creaney (b. 1978) is a Northern Irish self-taught artist working primarily in portraiture in the mediums of oil, pastel and pencil in a realist style. Her work focuses on subtle expressions and lighting to convey the inner world and story of the sitter. Creaney has exhibited throughout the UK, Ireland and Europe and has won multiple awards for her work including: The ESB Keating Award and Silver Medal for an outstanding art work at the 185th Royal Hibernian Academy Annual Exhibition and First Place in the Artist’s Magazine All-Media Online Competition (2014). She has won The Drawing Prize and The Rowel Friers Perpetual Trophy at the Royal Ulster Academy’s Annual Exhibition twice. She was shortlisted for the Hennessy Portrait Prize, Dublin (2016). She has been awarded the don niccolo d'ardia caracciolo award at the Royal Hibernian Annual Exhibition, Dublin, The Henri Roche Award and The People's Choice Award at The First International Pastel Exhibition, Rome (2017). Most recently she won the People's Choice Award at The Royal Ulster Academy, Belfast and the Portrait Prize at the National Open Art, London (2018).

Enda Griffin (b. 1974) is an established artist with over 15 years’ experience of teaching art, craft and design, now studying at Masters level in socially engaged art with Limerick College of Art and Design. Based in Co. Clare, Griffin currently works in oil paint and dry media with a focus primarily on figurative painting. Griffin’s work has been commissioned and exhibited consistently throughout Ireland and he has been short-listed for and won multiple awards including: Sky portrait artist of the year, Irish heat finalist (2014), Rose of Tralee portrait competition winner (2015), County Kildare Portrait Artist of the Year competition finalist and most recently Hibernian Club, Stephen’s Green, Portrait Competition, Shortlisted (2017).

Mick O’ Dea (b. Co Clare 1958) studied at the National College of Art and Design, Ireland and the University of Massachusetts from 1976 to 1981. He later completed an MFA at Winchester School of Art Barcelona and Winchester in European Fine Art (1997). He has lectured at NCAD (1981-1999) in addition to Portlaoise Prison, Wheatfield Prison, The Michael Smurfit Graduate Business School, Trinity College Dublin, Falmouth College of Art, Canterbury Christ Church University, Lyme Academy of Fine Art Connecticut, and the National Gallery of Ireland in addition to numerous other third level institutions. He was appointed as the first School Principal of the recently reopened RHA School and Studios (2006-2011). He was elected ARHA in 1993, and in 1996 RHA and a member of Aosdána. In 2014 he was elected PRHA and was appointed to the Board of the National Gallery of Ireland. In 2014 he was made an Honorary member of the Royal Scottish Academy and in 2015 he was elected an Honorary Fellow of the Anatomical Society in Madelene College Cambridge. In 2016 he was appointed chair of the Stamp Design Advisory Committee and a member of the Philatelic Advisory Committee of An Post. O’ Dea has exhibited and participated in residencies in Ireland and abroad. His most recent awards include The Ireland US Council/Irish Arts Review Portraiture Award and the Royal Ulster Academy Portraiture Award (2013).

Molly Judd (b. 1991) is an Irish Representational painter who began her studies at the Florence Academy of Art in Italy. In 2011, Judd began an apprenticeship with world renowned painter Odd Nerdrum, studying at his Atelier in Norway and Paris (2011-2013). Judd’s work has been exhibited extensively both nationally and internationally. She has received multiple awards for her work including: first place in the Mod Portrait Competition, Spain; the Hennessy Craig Scholarship and the Ireland-US council/Irish Arts Review Portrait Award at the RHA’s Annual Exhibition. In 2018, Judd received an Honourable mention in the figurative category of the ARC salons 13th International Competition also winning first place in the graphite section of the Artist's Magazine All Media competition in the US.

William Nathans (b. 1981) is a classically trained painter working in the USA and abroad. He began his formal artistic career in New York completing a BFA degree at the School of Visual Arts, NYC and continued for an additional three years in Toronto, Canada at the Academy of Realist Art. Nathans works mainly in oil and dry media, basing his work on studying the subtle range of tones and hues found under atmospheric north light. His work attempts to document the people of his time questioning how the present and the past have shaped them. Notably, Nathans received a commission to paint the official portrait of Cardinal John Foley, Grand Master of the Knights of the Holy Sepulchre which hangs in Vatican City paving his noteworthy achievements in portraiture. Since his relocation from the USA to Ireland in 2013 Nathans has exhibited nationally, including RHA Annual Exhibition (2018). Notably, Nathans’s most recent commission is the official portrait of the first woman Chief Justice of Ireland, Justice Susan Denham, which hangs in the Honorable Society of King's Inns.