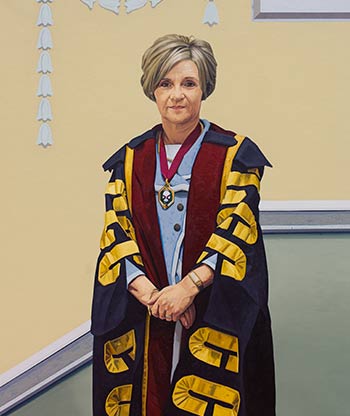 A graduate of UCD in 1978, Professor Eilis McGovern was awarded first place in the FRCSI exam in 1982. She completed her cardiothoracic surgery training at the Mater and Royal City of Dublin Hospitals, held a Council of Europe Fellowship at the Hospital Broussais, Paris and was a Clinical Fellow at the Mayo Clinic, USA. She was appointed a Consultant Cardiothoracic Surgeon in St James’s and the Mater Hospitals in 1987. Professor McGovern spearheaded the establishment of the country’s third public cardiac unit, The Keith Shaw Unit, in St James’s hospital in 2000 which resulted in excessively long waiting lists for cardiac surgery in Ireland rapidly falling to acceptable levels.

From 2006-2008, Prof. McGovern was appointed by the HSE as project director of a HSE initiative to reconfigure acute hospital services in the North Eastern Health Board and in 2018 chaired the steering group which developed the national trauma policy, 'A Trauma System for Ireland'. From 2012-2018 she was Director of the HSE National Doctor Training and Planning unit, developing policy on training, manpower and consultant appointments. She has received numerous honours and awards recognising her outstanding work, including an Honorary Fellowship of the American College of Surgeons.

Prof.McGovern was elected President of RCSI (2010-2012), becoming the first woman to hold the position in the 226-year history of the institution, and the first female President of any Royal College.