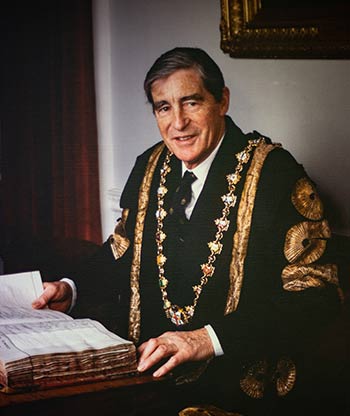 Graduating from UCD’s Medical School, Mr Francis A. Duff went on to train in urology at the Mayo Clinic, Minnesota. On his return to Ireland he lectured in UCD and was acting Professor of Surgery in 1978/9, an honorary Fellow of the College of Surgeons and Physicians of South Africa, and Australasian College of Surgeons.

Mr Duff became Chairman of the Medical Board of St Vincent’s Hospital and gave the Doolin Lecture before the Irish Medical Association in 1976, discussing ‘The Making of a Doctor’ focusing on the selection of medical students.

His RCSI Presidency was eventful and fruitful – The sportsground in Bird Avenue was sold and land in Tallaght purchased as playing fields. The Higher Education Authority’s report, which recommended the elimination of ‘surgeons’, was not received well by President Duff.

On January 1973, the Council gave the go ahead to its major building programme. Mr Richard Burke TD (Minister of Education) attended a ceremony where Mr Duff, on behalf of the College, signed the contract for the new building. In his speech at the 1974 Charter Day dinner attended by the Taoiseach, Mr Liam Cosgrave TD, he predicted an exciting future for the College and medicine in Ireland.

Mr Duff was Secretary to the College and served many committees. In 1980 he accepted the position of chairman of the Bi-Centenary Steering Committee.