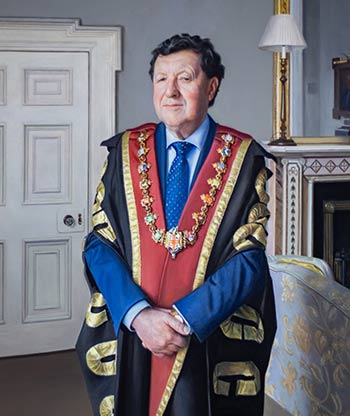 Professor John M.P. Hyland graduated from UCD and continued his postgraduate studies at St Vincent’s University Hospital and the University of Liverpool, UK, and obtained his Fellowship from The John Hopkins Hospital, Baltimore USA. He was awarded Masters in Surgery (MCh) by Research thesis.

Prof. Hyland is recognised both nationally and internationally in the field of advanced laparoscopic colorectal surgery. Among his many contributions in the field of colorectal cancer treatment is his development of a clinical database in the early 1980s of patients with colorectal cancer and inflammatory bowel disease, resulting in multiple research publications: He is a lead educator in minimally invasive surgery and past preceptor in laparoscopic surgery in the UK.

Prof. Hyland has the distinction of holding multiple national and international chairmanships and committee appointments. He was appointed by the Minister of Health of Ireland as Regional Director of Cancer Services in 1996 to develop a higher level of multidisciplinary team management in cancer services. He was Joint Lead for the National Clinical Programme for Surgery (2018-2020)

He was awarded Honorary Fellow of the American College of Surgeons, and FRCS Edin.

He is Professor of Clinical Surgery at UCD. Prof Hyland has been a Member of the Council of the RCSI since 2002.