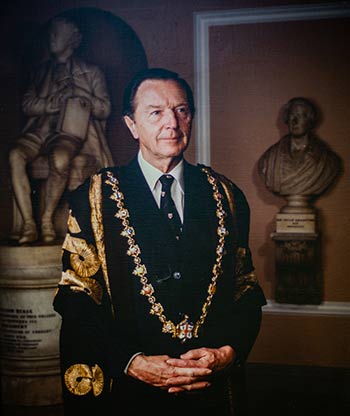 John M. McAuliffe Curtin received his Licentiateship in RCSI, taking the gold medal in Medicine and Surgery at Mercer’s Hospital and the McNaughton-Jones gold medal. He had an interest in the surgery of disorders of the facial nerve and wrote on this as well as other clinical subjects.

His Presidency (1974-1976) began with the laying of the foundation stone for the new medical school, formally opened in 1976 by the President of Ireland, Cearbhall Ó Dálaigh and attended by the Taoiseach, Mr Liam Cosgrave TD and the Tánaiste, Mr Brendan Corish TD. He was Chairman of RCSI’s Finance Committee. The Faculty of Nursing, with Ms Mary F. Crowley as Dean was also founded under his Presidency (1974) and the department of the History of Medicine was inaugurated.