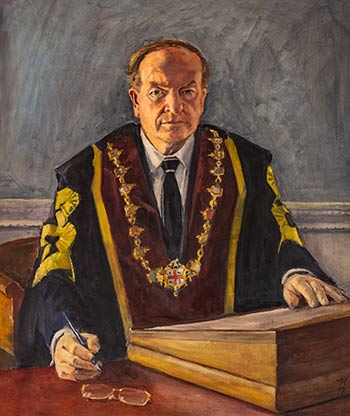 Mr Peter A. McLean received his Licentiate from RCSI and RCPI (1958). He carried out his postgraduate training in Ohio, USA as well as receiving general surgical training in the Charitable Infirmary, Jervis Street, Hammersmith Hospital, London and the Mayo Clinic, Rochester, Minnesota (1965-1968). He was awarded the Edward John Noble Award here and obtained FRCSI (1962).

A talented urologies he held the post of consultant surgeon in the urology and transplantation at Jervis Street and subsequently Beaumont Hospital for most of his surgical career (1968-1999). His foremost achievement was to co-ordinate and establish the infrastructure for a kidney transplant programme in Ireland (Charitable Infirmary).

Mr McLean held the post of President of the Biological Society and Association of Graduates, was bestowed an Honorary Fellowship by the Academy of Medicine, Malaysia and Singapore. He was the vice-president IFSC (2004) and Chairman Voluntary Hospital Consultants Group, IMA.

Mr McLean became Medical Staff Ombudsman of the Beaumont Hospital Board (a unique appointment in Ireland) and was Founder of the Kidney Transplant Foundation of Ireland.